The Choosing, by Jeremy Laszlo 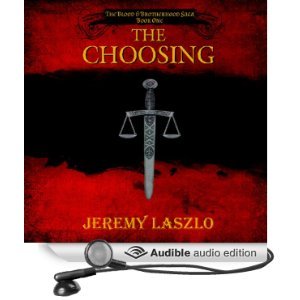 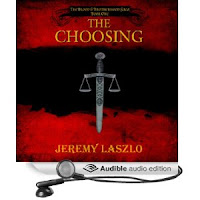 This week, we are featuring a recent Fantasy work by Jeremy Laszlo, called The Choosing.  It is the first book in a series called The Blood and Brotherhood Saga.

I am going to borrow the description of this book from the publishers.  It sounds very interesting.  Here it is:

Seth is a young man torn by fear and indecision. His life no longer in his hands, he fears an uncertain future where the only certainty is a life of servitude to the kingdom. Fortunately for Seth, he is not alone. His brother, Garret, too attends the choosing ceremony where their fates will be decided. Together, the twins make their way to the castle city of Valdadore for the choosing ceremony, but along the way, Seth notices a strange new trend in his life.
Time after time, strange circumstances befall him in what others might call a coincidence, but Seth knows something else is amiss and begins mentally cataloging each new and strange event. Learning his past is all a lie, Seth begins to fear more for his future as a dark goddess vies for his service to her cause. Seth’s loyalties and responsibilities begin to stack up as he makes friends and allies and even falls in love, but with the choosing ceremony growing ever nearer, will he be forced to flee the kingdom into a life of exile, or choose to serve the goddess who swears that only through her will he find peace?

Mr. Laszlo asked B.J. Harrison to produce the audiobook version of his novel.  I’ve heard some of it on audible, and the production is excellent!

Jeremy Laszlo approached B.J. because he liked the character voices he heard in the production of Sir Walter Scott’s Ivanhoe.  This makes sense, as B.J. had to create 25 characters for The Choosing, and Ivanhoe is a great show case for B.J.’s wide range of talent when it comes to creating characters.  As for the narrator, Mr. Laszlo wanted a British accent, a little like Gandalf.  B.J. thinks it worked rather well, and I concur.

Before the production began in earnest, Mr. Laszlo asked B.J. to send him samples of these characters, so he could hear what his cast would sound like.  This was important to the author, as this first volume of his saga introduces the characters of the series, as well as the mythologies involved.

If the sales of this audiobook are good, B.J. Harrison and Jeremy Laszlo will continue to work together on the rest of the series, of which 5 books have already been published.  Let’s wish them both good luck!

A word of warning, if you like to listen to your audiobooks with your little ones.  There are some ‘sexy’ scenes in this novel.  I am curious how those sound, personally.

Also, if you would like to have B.J. Harrison turn your book into an audiobook, there is a blog post for that!

So, enjoy The Choosing!  And maybe pick up a copy of the book that inspired this team effort!