The House Among the Laurels, by William Hope Hodgson

Friday’s latest installment of Fear in The Classic Tales was William Hope Hodgson’s “The House Among the Laurels.”  This story is part a chapter from a larger book called Carnacki.  Carnacki is also the name of the lead character, a ghost hunter.  In this story, our hero and his aids must investigate the horrific tales surrounding an Irish mansion. Once the blood begins to drip, people begin to die…

A big shout out to listener Vincenzo Bonitatibus for suggesting the week’s author to B.J. Harrison 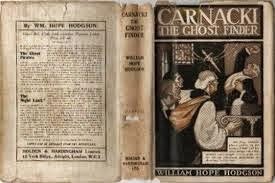 Hodgson was quite a character.  For a while, he owned a gym, where he trained cops.  He was also on stage with Houdini at least once, and put the cuffs on the magician.  Later Houdini claimed that Hodgson has purposely sabotaged the cuffs so they were particularly hard to open.

Hodgson spent much of his youth at sea, first as an apprentice and later as a mate.  His time at sea not only inspired many of his stories, but was also the cause for his interest in fitness.  You see, he was heavily bullied by other seamen, so decided to buff up a bit.

I hope you are enjoying B.J. Harrison’s scary tales this month!  But if you need more, please check out Classic Scary Tales, Vol. 1. and enjoy over 15 hours of your favorite frightening writers, such as H.P. Lovecraft, Edgar Allan Poe, and Mary Shelly, all narrated by your favorite person!