Through the Looking Glass, by Lewis Carroll 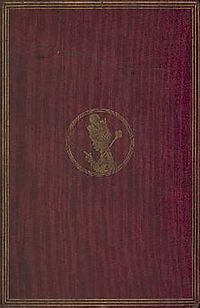 Published in 1781, many critics thought Through the Looking Glass was more mathematical and cerebral than Wonderland.  Thankfully, the story had passed down to us through the generations, so we can make our own judgments on the playfulness and darkness in the story. 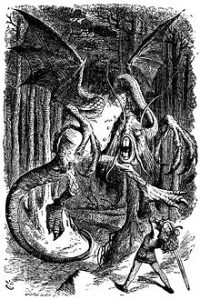 The story opens six months after Alice’s first adventure, on a cold and snowy November day.  Alice is playing with Dinah’s kittens and pondering, like only she can, on what the other side of her mirror might be like.  She gets up on the mantelpiece and finds that she can easily step through the mirror and find out.  On the other parlor, she reads, with the aid of the mirror, a poem called “The Jabberwocky.”  As you listen to BJ read this poem, enjoy the level of darkness he puts into his narration of the poem.  Did you know that his favorite version of this is from a Muppets episode?  He’s got a good point!
Eventually, Alice makes it into the garden which is now full of sunshine.  After meeting the Red Queen, Alice sets on a quest to become a queen herself.  For you see, just as with Alice in Wonderland where there was a deck of cards, in this story we are on a chess board.  Alice is a pawn on the White Queen’s army and has to move to the other end of the board to win her crown.
Along the way, we meet the disturbing, yet wonderful Twiddledee and Twiddledum, who tell us the story of “The Walrus and the Carpenter,” one of my favorite poems in the book. 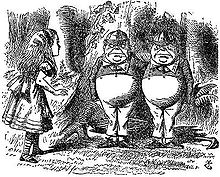 BJ tells me that the Alice in Wonderland was one of his favorite Disney movies, mostly because of the actors.  I mean, can there be a better Mad Hatter than Ed Wynn?  By the way, did anyone notice that King Candy in Wreck It, Ralph is a total homage to Wynn’s Hatter?  When as a kid,  BJ figured out that that both the Walrus and the Carpenter were voiced by the same person and was enchanted by the idea.  I see the seeds of his later career sprouting, don’t you? 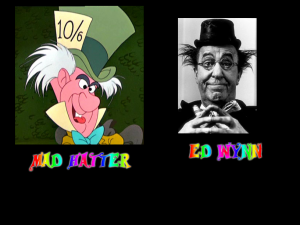 It is rather fascinating how these stories have permeated pop culture.  In Warehouse 13, the Syfy Channel series, they mention that Alice was a real person, and that Carroll was simply writing of her descent into madness in these stories.  As BJ was reading of Alice’s trouble in navigating to the garden from the house, he got a sense of what they were going for.  There is a definite dark twist that has been explored by many movies and video games.
Join BJ Harrison for  Through the Looking Glass, and don’t forget to check out his performance of Alice in Wonderland.
And tell us, what’s your favorite part of the story?  Are you discovering it for the first time through The Classic Tales?  Do you have a favorite movie version or pop culture reference?