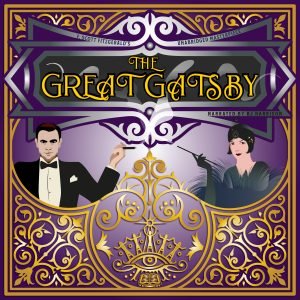 Always a candidate for the title of “The Great American Novel,” F. Scott Fitzgerald’s 1925 novel The Great Gatsby will be our next podcast mini-series for March. This novel has made it into the canon of required reading for many American high schools for its richness of symbolism, its mystery, and its beautiful prose.

Drawing freely from the real people and actual events of its setting in 1920s Long Island (with literary license, of course), The Great Gatsby looks at the acquisition of the American Dream of wealth, power, and prestige, and what the costs are to those who realize that dream. And if that sounds a bit too highbrow for you, there are speakeasies, a broken nose, wild parties, and a bit of rough and tumble as well.

The novel was not a huge success when it was first published, with many critics saying that Fitzgerald’s earlier works were far superior. At the time of its publication, it earned only $2,000 for its author, and it languished in obscurity until the 1960s, when re-examination and new critique recognized its relevancy. Its themes of class, gender expectations, racial stereotypes, and consumerism are still being examined today, nearly 100 years after The Great Gatsby’s publication.

The most recent film adaptation of Gatsby, starring Leonardo DiCaprio and Toby Maguire, is a faithful, if stylized version, and well worth watching. But the silent movie version that was made in the year after the novel’s release was so bad that Fitzgerald and his wife, Zelda, walked out before the end. There have been several adaptations between those two; if you enjoyed these podcast episodes, you might want to check them out—and there’s a computer game based on the novel, too!

Our new occasional guest blogger is Jan Ackerson. Contact her at jan_ackerson@yahoo.com if you are looking for a developmental editor for your written work or to purchase her book of microfiction, Stolen Postcards.