During the month of November, we have all been enjoying stories from The Memoirs of Sherlock Holmes, by Sir Arthur Conan Doyle.

These are the first three stories in the series, Silver Blaze, The Yellow Face, and The Stockbroker’s Clerk.  B.J. knew we hadn’t had mysteries in a while, and we needed a break from all the horror stories.  I am delighted, as I truly enjoy following Holmes and Watson on their adventures.  All of these stories are masterfully written.  They are complex, witty and often break the pattern of a basic mystery.
Sir Arthur Conan Doyle was born in 1859 in Scotland.  He was a multi-faceted man.  After a rough childhood dealing with an alcoholic and insane father, he was educated at a Jesuit school in England, where he had trouble adjusting to the rigid lifestyle. About these experiences, he wrote, “Perhaps it was good for me that the times were hard, for I was wild, full blooded and a trifle reckless. But the situation called for energy and application so that one was bound to try to meet it. My mother had been so splendid that I could not fail her.” 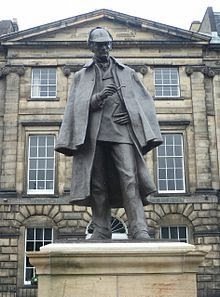 Afterwards, he became a medical doctor and traveled overseas on at least two vessels.  It was during this time that he began writing short stories.  It was a Sherlock Holmes story that helped him break through, “A Study in Scarlet”.  During his life as a writer, he wrote mysteries, worked on historical novels, science fiction, romance and even plays.
“Silver Blaze”, the first story we heard, revolves around the mysterious disappearance of a famous race horse and the inexplicable death of his trainer. When you listen, keep your ears out for the famous phrase “curious incident of the dog in the night-time,” I don’t want to spoil the fun, but this is the crux of the matter.
“The Yellow Face” is intriguing because it is one of the few times when Sherlock makes an incorrect deduction.  Not to mention it is rather sentimental in nature, featuring a couple of mixed race, a topic that was rather progressive for the time.
Finally, we have “The Stockbroker’s Clerk.” In this story, a man is hired to do a menial job and is getting paid out of proportion to his duties.  He finds this situation suspect, so hires Holmes to find out if there is anything amiss.

In keeping with the Blog tradition of finding the best renditions of our stories, you need to check out the movies starring Basil Rathbone and Nigel Bruce as Holmes and Watson respectively.  There are 14 movies, all set after WWII.  You can find a wonderful box set of the here.  Basil Rathbone is one of the best Sherlock Holmes in film, and also the man after whom B.J. named his eldest son.  Another excellent Holmes is Jeremy Brett who played the role for the Granada Television series during the 80s and 90s.  Check the listings to your local PBS station, you are bound to find it playing soon. 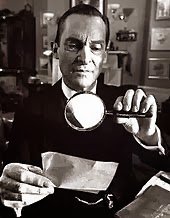 If you want something more modern, check out the BBC’s Sherlock, staring Benedict Cumberbatch and Martin Freeman.  Here, television writer Steven Moffat of Dr. Who fame re-imagines the cases keeping the pace and deduction qualities of the originals, while updating the adventures themselves.

If you’d like more Sherlock Holmes, please go on over to our website and pick up a copy of The Adventures of Sherlock Homes.