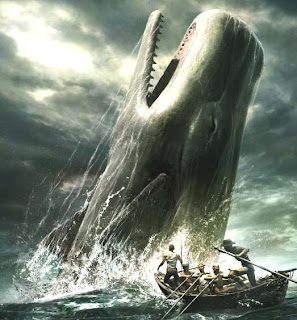 I’ve realized that this is a book I’ve had to do for some years now, since it is one of the books that pops into people’s heads when you hear the word “Classic” in its relation to fiction. It’s one of those novels that everybody’s heard of, and nobody ever reads. It’s definitely no featherweight. When I first read Moby Dick, (I should say here that this is the first time I have actually “read” the book i.e. decoding the words mentally. I have listened to the audiobook twice before producing it.), I was struck by the fact that it felt like two books: a textbook and an adventure novel. Only now that I have had the opportunity of being deluged in the text has it hit me how inextricably connected is the plot with the expository information of whaling.

Since we are now historically so distant from whaling, (or are we? The main ingredient of WD-40 is Fish Oil), the novel could almost be deemed a fantasy. But the fact that this mode of lifestyle really, historically happened is what gives the tale tooth. From the “dentistical” instruments the harpooners use to extract the sperm whale’s teeth, to the history of the mast head, to the precise method in harvesting the whale oil from the corpse, each detail gently fleshes out this unique world to the 21st century harpooner of iPads.

I was first exposed to Moby Dick through the miniseries with Patrick Stewart as Ahab, Henry Thomas as Ishmael, and Gregory Peck as Father Mapple. A flawed production, but the language and structure of the story completely captivated me. When I read of Ahab sleeping with his hands balled into fists so tightly that in the morning the imprints of his nails were traceable in his palm, and his head so tormented that in the morning it was as if a baked brick had laid there all night, I was blown away. How had I lived so long and not discovered this? Then the textbook began, and I discovered what a reading marathon really meant. 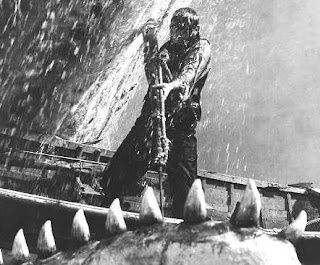 The creation of the audiobook is no light undertaking. Reading Melville is just a couple of steps down from Shakespeare in difficulty. Now, the main reason I began creating audiobooks is because I wanted listeners to be able to absorb the information easily. It’s no easy task to read Melville as if his words are your own, and you are conversationally narrating a story. For every weekly episode, I will listen to an audio version of the Chapters I plan to record. I don’t like to get too far ahead. Then, before I record in the studio, I will again read the text. There aren’t a ton of characters to keep track of, and I can definitely feel my mental muscles getting stronger as the production progresses. Hamlet was a real challenge, but it was only 5 hours long. Moby Dick is 24 hours long. I am rather pleased with the result.

In the end, Moby Dick is an epic as is seldom created today. The most similar seafaring epic I’ve encountered is the Aubrey/Maturin series of novels by Patrick O’Brian. Here O’Brian takes actual sea battles during the Napoleonic Wars, inserts his fictional characters, and creates a world so true to life that every point of navigation, every surgical instrument, and every gradation of a Ship-of-the-Line is precisely explained. I can understand why Moby Dick wasn’t immediately embraced upon its publication. I had a similar experience with O’Brian’s novels. It takes so much to wade through the nautical details and find hidden plot and characters, that it seems at first more effort than it’s worth. But when you really give it a chance, you discover the golden nuggets of wisdom that lie hidden in the concentric layers of apparently glutinous blubber. But without the blubber, there is no whale at all. And while the reading of Moby Dick is considered a test of endurance by some, it is also a badge of honor. For you now belong to a special fellowship who have delved into the depths of their own souls, and discovered the white whale that lurks in the depths of each of us.