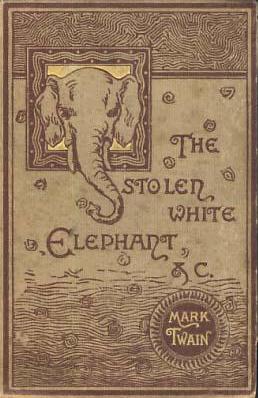 High time we lampoon detectives the world over with “The Stolen White Elephant,” by Mark Twain!  This story was written in 1882, a time when detective stories were all the rage (think Edgar Allan Poe’s “The Murders in the Rue Morgue“).  Mark Twain never missed an opportunity to poke fun at anything or anyone.

The story is about a white elephant meant as a gift to the Queen of England from the Emperor of India.  Somehow, this animal, we’ll call him Jumbo for the sake of brevity, disappears somewhere in New Jersey, and hilarity ensues.

Does this sound silly?  That’s because this story is a farce, a light dramatic work in which highly improbable plot situations, exaggerated characters, and often slapstick elements are used for humorous effect.*  In these kinds of works, the plot is so incredibly convoluted, that the audience often gets lost along the way.  That’s what makes it hilarious.  One of B.J.’s favorite farces is The Great Race, an incredibly funny film filled with outlandish characters that are only surpassed by the story in which they get caught!  A more contemporary example, and one of my favorites, is Ferris Buller’s Day Off.  You get the idea.

If you enjoyed this title, check out Oscar Wilde’s “The Canterbury Ghost,” or “The Sensational Baron von Munchausen,” by Rudolph E. Raspe.