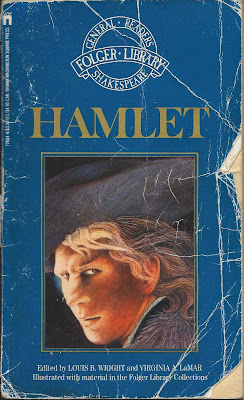 The latest production of The Classic Tales Podcast is an episodic presentation of Hamlet, Prince of Denmark, by William Shakespeare – a miniseries in 5 episodes. Hamlet has been my favorite play for many, many years and if I had to point to one work of literature that has turned my casual pursuit of books into a passion for the classics, this is it. When I was a teenager, and a junior in high school, I wanted to take it easy. So, instead of enrolling in Honors English 2, as I could have, I thought I’d take the year off, essentially, and enrolled in the “lower grade” English class. This was a profound misstep.
I have no one to blame but myself, I’m afraid. For my elective reading, I chose Hamlet, and it literally changed my life. I memorized the soliloquies and performed them in drama class. I watched the film productions of Derek Jacobi, Kenneth Branaugh and Lawrence Olivier. There was something that spoke to me in this character that I particularly identified with when I was 17, and it still does today.
When I was a senior, we competed in the statewide high school one act play Shakespearean competition with Hamlet, and I was cast as Hamlet. We performed in an outdoor theatre designed after the fashion of the ancient Globe Theater in England. It was experience I’ll never forget.
Producing an audiobook version of Shakespeare takes around four times as long as a typical audiobook. For, even though I am very familiar with the characters and much of the text, Shakespeare’s vocabulary is so extensive and archaic that each page needs to be studied practically ad infinitum.

I am reading from the same copy of Hamlet that I studied in high school, a Folgers Library edition. I would recommend it as the only way to read Shakespeare, as it has the text on one page, and notes on the opposite page. I would study a page, make sure I understood ALL of the text, and then perform it in the character voices, adding the “says Horatio”s on the fly. I would then pause the recording, turn the page, and start studying again.

I chose to keep the character marks in the present tense because it tends to simulate the effect of a play that is now taking place, rather than a static event that happened long ago. It just seemed like too much of a jump to say, “Horatio said”. It didn’t fit.
Finally, the pacing of this audiobook is supremely critical. To display the range of character’s emotions, the pauses are almost as important as the words. There is no interpretive text, stating what is going through the character’s mind, what he’s doing or looking at that may hint at the occupation of his emotions. There is a reason that trained Shakespearean actors can do things no one else can. I wish I were one. If anyone wants to send me a Julliard Scholarship, I’d jump at it in a heartbeat. Still, if I can turn out a better Hamlet than Mel Gibson, I would consider this endeavor a success.