Aladdin and the Wonderful Lamp, from The Arabian Nights 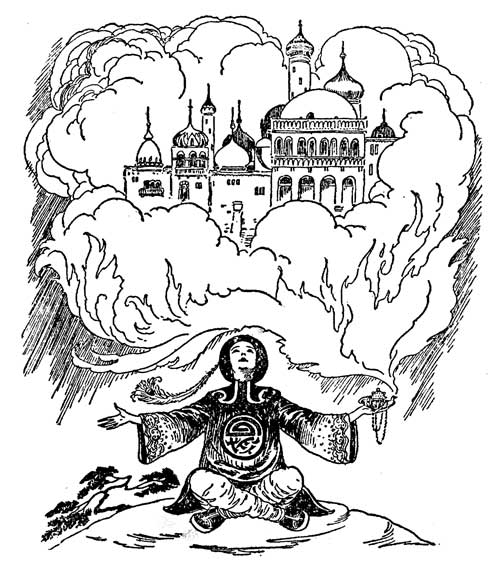 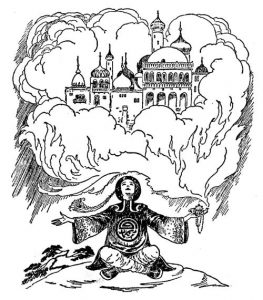 The Arabian Nights originated in the oral folk tales originating from India, Persia (Iran), Iraq, Egypt, and Turkey among others. The original manuscript is now lost, consisting of a ninth-century text translated into Persian called Hazar Afsanah (A Thousand Tales). By the end of the thirteenth century, the principal tales were compiled and written down. The book’s Arabic title means Thousand and One Nights. Over the years, the collections anonymous editors added new tales to justify the title.
The French scholar Antoine Galland was the man instrumental in bringing the tales to Western Culture, releasing his collection of Arabian Tales in 1704. The text used for the Classic Tales Podcast releases of the Arabian Nights tales are an English translation by H.W. Dulken, which is based on Galland’s sweeping translation. There are several other remarkable translations to date, perhaps the most notable being Sir Richard Burton’s translation (1885-1888). The Burton translation is said to have retained the explicit erotic quality of the original text. 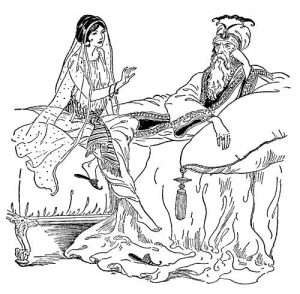 I have enjoyed The Arabian Nights for many years, and creating the Aladdin audiobook has been a lot of fun. It’s very easy to follow, and so completely transports you to the land of enchantment and wonder. I am particularly fond of the way that women have strong roles in many of the tales. In Aladdin, it is the Princess herself who saves Aladdin from the African Magician through her bravery and daring, (of course she was following Aladdins plan). In Ali Baba, it is the slave girl, Morgiana – not Ali Baba – who kills the forty thieves. This pattern is consistent in many of the other tales. As I have sifted through many, many classic titles, it is true that by and large they are often racist, sexist, misogynistic, and many other things that make a modern audience squirm. While there are still many of these things present in the Arabian Nights, I love to find that there is a strong female character in many of the stories. We need more stories with a strong female lead. This is also why Cinderella is my favorite Disney movie, because she actually chose to be cheerful despite her wretched circumstances. Did she complain? No. As a result, she got a fairy Godmother who granted her a few wishes… (Please see Cycle of the Hero) 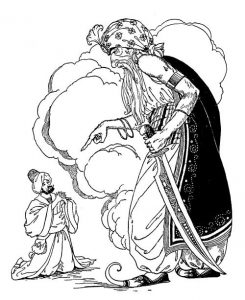 The Disney film of Aladdin is basically a blatant ripoff of the film A Thief of Baghdad, 1940.The film is still a lot of fun, with Conrad Veidt as Jafar and Sabu as Aladdin. The visual effects are of course, dated, but very advanced for the time. A new live-actionmovie of The Arabian Nights is slated for release in 2014. Dwayne Johnson is on the cast list. That’s kind of all we know.
In a world where it seems that every culture is misunderstood in some way or other, let’s enjoy a magic carpet ride through the world of secret caves where rubies and emeralds grow on trees, and genies always appear right when you need them most.