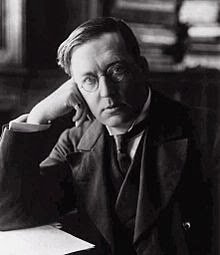 English writer M.R. James broke the mold of the Gothic ghost story by making the settings and devices much more realistic.  The stories took place in small villages, and there was often an item of ancient power (often a book) that set the story rolling.  This use of ancient objects led James’ stories to be called “antiquarian ghost stories.”

Montague Rhodes James was a scholar and provost of King’s College in Cambridge and then of Eaton College.  His academic life revolved around the medieval era.  It was through his studies that he came to choose that time period as a setting for his stories, and how he became fascinated by evil and magical objects which he would then  feature in his ghost stories.

As I mentioned earlier, James wanted his stories to be believable. He said he wanted to “put the reader into the position of saying to himself: ‘If I’m not careful, something of this kind may happen to me!'”  As far as his own doctrine, he was rather cagey, when asked if he believed in ghosts he said, “I answer that I am prepared to consider evidence and accept it if it satisfies me.”  We have a saying in Spanish which loosely translates to “I don’t believe in witches, but they sure do fly!”  I have a feeling James would have understood.

In keeping with the tradition of finding an interesting old movie based on our story, I give you The Curse of the Demon (or The Night of the Demon), a 1958 production that seems to have had their own demon to deal with (to show or not to show)  I haven’t seen it, but it looks good.  If you have, please leave a note on in the comments!.

If this month’s stories aren’t enough to keep you scared properly, you might want to pick up a copy of The Classic Scary Tales!